Prime Minister Shinzo Abe intends to declare a state of emergency over the coronavirus outbreak in Japan, a government official said Monday, as a recent surge in infections sweeps Tokyo and other major cities.

The declaration, based on a recently amended law, will empower local authorities to instruct the public to stay at home and request the closure of schools and other facilities. The move will target big cities such as Tokyo and Osaka, the official added.

The declaration was made necessary by a rapid nationwide increase in COVID-19 cases, with infections spreading and posing significant risks to people’s lives and the nation’s economy, the official said.

Pressure had mounted for Abe to issue the declaration with Tokyo Gov. Yuriko Koike and the Japan Medical Association calling for the move.

An emergency declaration, the first of its kind in Japan, would restrict individual rights, allowing prefectural governors to call for specific action to prevent the spread of the virus.

Abe is not permitted to declare a state of emergency at his own discretion. He needs to seek input from an advisory panel comprising experts in medicine and public health who determine whether the situation calls for an emergency declaration.

As of Sunday, the number of people who have contracted the pneumonia-causing coronavirus in Japan stood at 4,563, including some 700 from the Diamond Princess cruise ship, with 104 deaths reported.

To prevent the health care system from becoming overwhelmed and other widespread impacts, the governors of areas subject to the declaration will be able to instruct the public to refrain from going outside except to carry out tasks such as grocery shopping and provide essential services including healthcare and transportation.

They can also place restrictions on the use of facilities where large groups of people gather — schools, social welfare facilities, theaters, music venues, sports stadiums — including requesting them to close temporarily.

In the event that existing hospitals become overrun and new ones need to be quickly set up, as has been the case in some other countries including China and the United States, the governors will be able to expropriate private land and buildings under certain circumstances.

They can also requisition medical supplies and food from people that refuse to sell them, and compel companies to help transport emergency goods.

Abe was extended the ability to set in motion the process of establishing a state of emergency on March 13, when the Diet passed a revised version of a law enacted in response to the 2009 swine flu pandemic. The revision is effective for two years.

Previous requests by the prime minister for all schools to remain shut and for large sports and entertainment events to be canceled or postponed to prevent group transmission were made without the legal basis to enforce them.

One reason for the recent surge in infections has been cases imported from abroad, prompting the government to implement an entry ban on foreign travelers that have recently been to one or more of 73 countries and regions.

Abe has promised the country’s “boldest-ever” stimulus measures to help struggling households and businesses amid the virus epidemic, more than the 56.8 trillion yen ($522 billion) package rolled out during the 2008 global financial crisis.

Economists expect Japan’s economy, already reeling from a consumption tax hike in October last year, to have fallen into recession due to the impact of the pandemic. 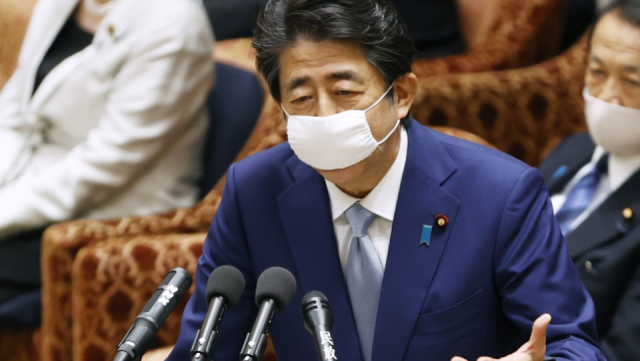