The whole of Japan entered its first weekend under a state of emergency Saturday, with tourist sites and entertainment districts largely deserted as people heed a government call to stay home to stop the coronavirus’ spread.

There were very few people in the main shopping arcade in Miyazaki, the capital of the southwestern prefecture of the same name, with “closed” signs adorning most store doors despite the prefectural government not requiring nonessential businesses to cease trading.

“Normally there are lots of people on Saturday morning who’ve finished working at bars,” said Tokuyoshi Hidaka, a 70-year-old taxi driver who was on the hunt for passengers. “My earnings have almost halved since March.”

Prime Minister Shinzo Abe on Thursday expanded the areas covered by the state of emergency to the entire nation after originally declaring it over only Tokyo and six other prefectures — Saitama, Chiba, Kanagawa, Osaka, Hyogo and Fukuoka — on April 7.

The total figure excludes about 700 from the Diamond Princess, a cruise ship that was quarantined near Tokyo in February.

Popular tourist spots in Kyoto, western Japan, were largely empty, with the scenic Togetsukyo Bridge in Arashiyama that is normally swarming with visitors just seeing a few people strolling or passing by in cars.

“Sales are all but zero, but it’s tough just staying at home,” said a 45-year-old male owner of a grocery store near the bridge. He said he will keep his store open as long as he can. 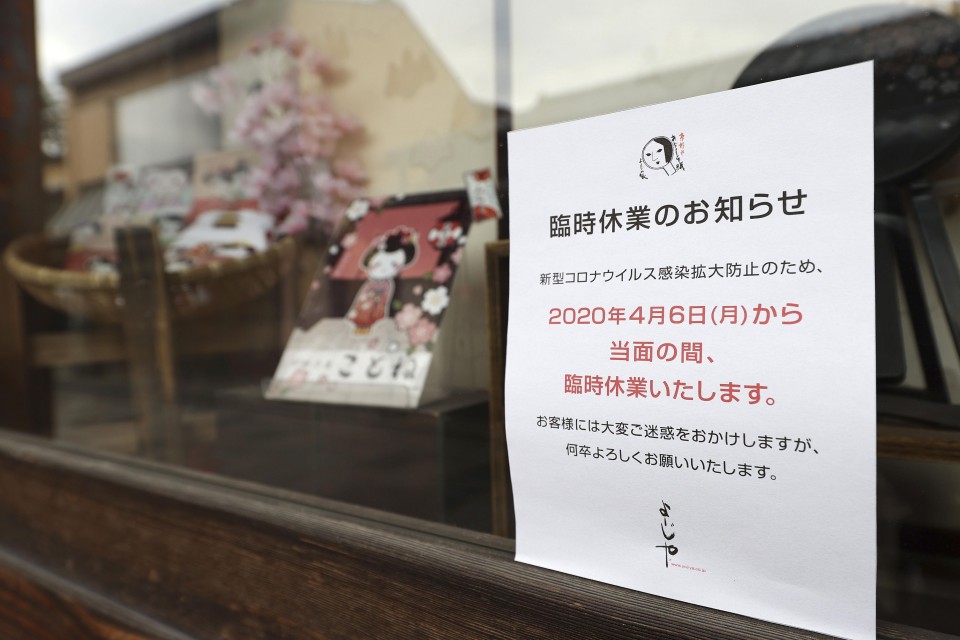 At the Tottori Sand Dunes in western Tottori Prefecture, a 19-year-old university student from nearby Hyogo Prefecture said he and his two friends decided to visit as they believed the site does not have the 3 Cs — confined spaces, crowded places and close contact — the government is asking people to avoid.

“We’ll continue to drive through Tottori Prefecture but we’ll try not to make stops at shops (where we can come into close contact with people),” he said.

In the city of Fukuoka, people were thin on the ground at the major shopping district of Tenjin but many still walked and jogged in Ohori Park.

“There are more people than usual,” said a man in his 60s who visits the park for a run once a week. “There is nowhere to go with all shops closed and I suppose they are all here to exercise.”

In addition to the seven prefectural governments that were included in the first state of emergency declaration, nine others including Aichi and Kyoto are to ask nonessential businesses to suspend operations, with four more including Ishikawa and Hiroshima considering following suit.

Abe said during a press conference on Friday that people must avoid traveling from cities to rural areas, taking possible infections with them.

Iwate, in the northeast, is now the only one of Japan’s 47 prefectures to not report a case of infection.

Sixty-year-old Nobuko Yoshida, who works at a restaurant in the capital city of Morioka, said the expansion of the state of emergency “will make things inconvenient (for her work)” but accepted it “can’t be helped as we don’t want infections here.”

Under the monthlong state of emergency, Abe is asking people to reduce contact with others by as much as 80 percent and companies to shift to teleworking to achieve a 70 percent cut in commuters to prevent the COVID-19 disease-causing virus’ further spread.