The Tokyo metropolitan government is arranging to allow barbers and do-it-yourself and hardware stores to operate as usual, a source familiar with the plan said Thursday, as the capital, under a state of emergency, seeks to narrow down its list of business suspensions.

Department stores, outdoor sports facilities and “izakaya,” or Japanese-style pubs, will also likely be excluded. Izakaya, however, will only be allowed to open until around 8 p.m., according to the source.

As Prime Minister Shinzo Abe declared a state of emergency on Tuesday for Tokyo and six prefectures, Gov. Yuriko Koike can request that businesses halt operations to prevent the spread of the new coronavirus.

Tokyo confirmed 181 new cases on Thursday, a record daily increase. The number topped the previous record of 144 marked Wednesday, bringing the total in the Japanese capital to more than 1,519.

Across Japan, the total number of infections topped 6,000, including some 700 from the Diamond Princess, a cruise ship quarantined in February near Tokyo, with the death toll standing at over 100.

With work to finalize the business closure list under way, the central and metropolitan governments are at odds over the scope of businesses that should be considered essential to people’s daily life.

The Tokyo government had included such businesses as barbers and DIY stores on its draft list, although the Abe administration saw the target as too broad.

Both governments have been in consultation over what should be on the list, and Koike plans to announce the final version on Friday so that it can take effect from Saturday.

“We’re making arrangements (with the metropolitan government) to keep barbershops and home centers open,” Yasutoshi Nishimura, Japan’s economic revitalization minister, told reporters. He is in charge of issues related to the emergency declaration.

Abe’s state of emergency declaration on Tuesday has enabled the governors of Tokyo and the six prefectures, including Osaka and Fukuoka, to take more powerful steps than before to stop the spread of COVID-19, the disease caused by the new coronavirus.

Residents have been asked to refrain from unnecessary outings, and Abe has said person-to-person contact needs to be reduced by about 80 percent from usual to prevent an explosive surge in infections.

Grocery shopping, for example, is considered essential, and supermarkets and convenience stores remain open. But department store operators such as Isetan Mitsukoshi Holdings Ltd. and Takashimaya Co., have decided to shut stores in the designated areas voluntarily. 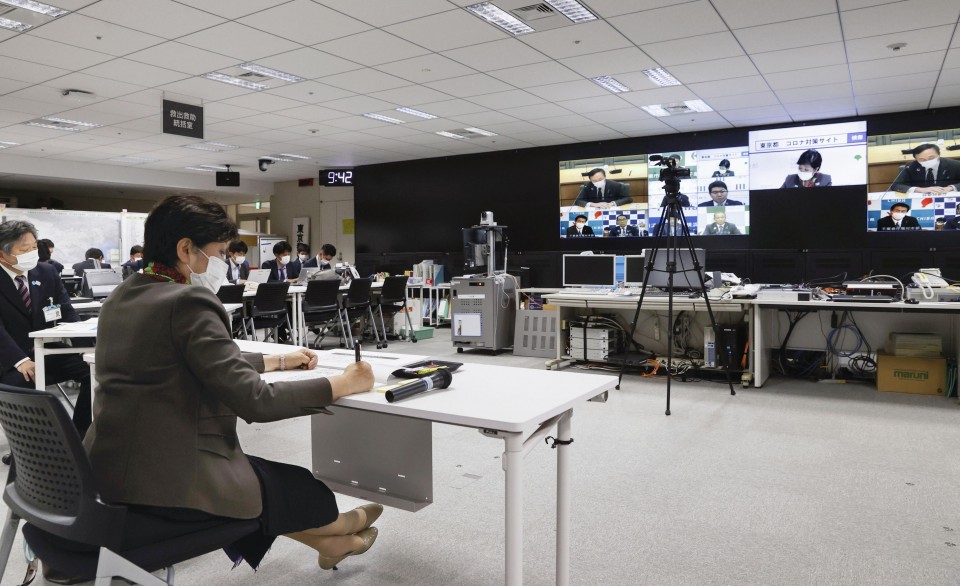 (Tokyo Gov. Yuriko Koike speaks at a video conference at her office in Tokyo on April 9, 2020.)

“Speed matters because business owners will be in trouble if they don’t know whether to keep their stores open or not,” Koike told reporters.

The other four prefectures for which Abe declared a state of emergency are Chiba, Kanagawa and Saitama in the Tokyo metropolitan area, and Hyogo in western Japan.

The government’s policy is that the priority should be to ask residents to stay indoors rather than making closure requests to businesses.

Prefectural governors have been calling for state compensation for businesses that may be asked to halt operations, but the Abe administration has so far taken a negative stance toward that.

Coronavirus fears give rise to stigma in Japan’s local communities